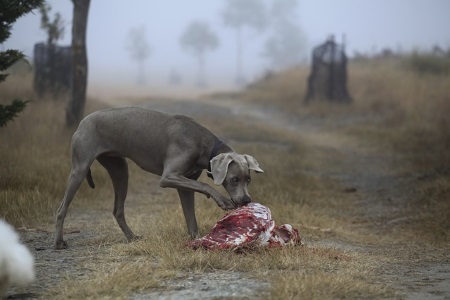 The use of meat in dog food

Dogs are non-obligate carnivores, rather than omnivores, which means their teeth, digestion, enzymes etc are primarily that of a carnivore, but they have adapted to cope with small amounts of vegetable and grains. Nevertheless it is important for us as dog owners to understand the use of meat in dog food, and the way that production companies communicate this information to us.

As with human food labelling, ingredients are listed in order of amount included (by weight). So the first ingredient on the list is present in the greatest amount and the last ingredient in the smallest amount. This matters a great deal, once you begin to work out whether a feed is of a quality that you are happy with.

The main components of most dog foods are:

Is the meat in dog food all the same quality?

Protein is needed in your dog’s body to build muscle, enzymes, hormones, blood, hair and much more. Indeed, every cell contains protein, and it is an essential nutrient for health and wellbeing. Likewise every cell of an animal that is eaten, everything from muscle to feet, bone to brain, and blood to intestine contains protein, but it’s not all of the same quality (nutritionally) or digested as easily. This just means that the protein eaten isn’t necessarily all available for the dog’s body to use, and that some of it will pass out undigested.

Around 50% of an animal that is bred and killed for human consumption is NOT used in the human food chain, and since an ancestral dog would naturally eat an entire ‘kill’, there is no issue with dog food cleaning up our ‘waste product’. However, a problem arises when their food is *primarily* poor quality proteins, which are not as easily digested or readily available for the dog’s body to use. This issue can be compounded by the fact that we often add a large proportion of grain to dog food. Grain also contains protein, but at a much lower level than meat, so adding it reduces the overall protein content of the diet. The protein in grain is also less digestible (available) to a dog than the protein in meat. Grain is primarily starch, and unlike wolves, dogs have evolved – alongside man – to have a small amount of the enzymes needed to digest starch.

Grain is around a quarter indigestible starch (fibre), which itself assists in maintaining a healthy gut, but maize (corn) and wheat are harder for a dog to digest than rice. As much as another quarter of a portion of wheat or maize is not digested, meaning that essentially only half of the amount put into a dog food is actually available to the dog’s body to use. In this sense, these grains can be viewed as cheap fillers – if cost was not a primary consideration it would make sense (nutritionally) for rice or sweet potato to be the primary carbohydrate in all dog food, as (apart from the fibre) they are almost entirely digested.

The pet food market is further complicated by the presence of open and closed menus. As you start to look at lists of ingredients, you’ll notice that some clearly label their product as containing salmon, or chicken, or lamb. Others simply make vague references to meat, poultry or fish, without mentioning any specific animal. This is a technique that holds the menu open to include whatever is the cheapest meat product that can be sourced at a given time. The end result is a cheaper product, but one where nutritional quality can fluctuate over time. All these factors mean that the type of meat in dog food matters and happily the clues to quality are in the labelling.

As a general rule, closed menu products that list an actual animal as the source of the meat (e.g. chicken and chicken derivatives, rather than meat and meat derivatives) are often a higher and less variable quality. However, it can be far more complex than that. The next thing to consider is the order of the ingredients. If the list reads wheat, chicken derivatives, maize… it is unlikely to be of better quality that a list that reads meat and meat derivatives, rice, sweet potato… The first list probably has less meat and of a lower quality, as well as starchy ingredients that are harder for the dog to digest.

We’ll finish with some definitions that will help you to understand what different meat labelling means. The following are listed in order of quality, where quality is defined as the amount and digestibility of the protein in the food.

If the label says:

The more digestible your dog’s diet the less faeces they should produce!

It takes an extraordinary amount of protein to grow a healthy coat. Poor quality feeds often result in dull, thin or ‘out of condition’ coats. If you change the diet it will take a few weeks to really notice a difference.

The use of meat in dog food